Boston - one horrible incident of living in the times of terrorists


My youngest daughter lives and works in Boston. She contacted me after the explosion to assure me she was okay. My concern abated, but it will be a long time before the people of Boston and the surrounding cities can walk the streets without thinking about the horrible event. Unfortunately, this is likely to happen again, if not in Boston, then somewhere else. 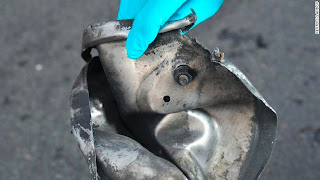 It will be interesting to learn if the two Chechens did this on their own or were part of a more extensive terrorist plot. Young men with typical Caucasian features, light coloring, and no background of associations with radical groups, present the worst case scenario for the national terrorist defense system.

We are in a not so undeclared war with people who operate outside the laws of humanity, which has no foreseeable end. While I am against the death penalty on most matters, I have no sympathy for American citizens who go to Al Qaeda camps so they can prepare themselves to set off bombs against the people of the world.  Taking the fight to the terrorists is absolutely necessary. They must know at all times that their next moment may be their last.

Posted by Neil Benson at 7:46 PM No comments:


The tragedy in Connecticut has generated a lot of discussion. Better gun control is immediately brought up. While I believe better gun control would help, it would not stop the problem. The attachment of Americans to guns of all sorts creates an environment and opportunity for anyone who wants an automatic weapon to obtain one. The information below boggled my mind when I heard about it.

Anyone in America who wants the same weapons our Special Forces soldiers are using can easily obtain them.

Much discussion about making sure people with mental illness don't get access to guns. Much easier said than done.

I read a long discussion about how the closing state psychiatric hospitals has caused these mass murders. Almost all of this information is wrong. How do I know? I did my clinical internship at Fort Logan Mental Health Center in Denver Colorado in 1970-71. State mental institutions were awful, people got sicker, not well. Two major events led to the huge downsizing of state institutions. First, new drugs came out that enabled schizophrenics and others with serious mental disorders to function in the community. They needed a lot of support and help to function, which unfortunately didn't come for the next 15 years. The other major factor was the rise of the Comprehensive Community Mental Health Centers.

In Colorado, they took money from the state institutions and funded the mental health centers in the community. California, not just Reagan, did defund mental health, resulting in people on the streets who should not have been released. The vast majority of serial killers and mass murderers suffer from a significant personality disorder. "Crazy people" rarely kill others, and autistic people are the least likely to kill others

Posted by Neil Benson at 7:11 PM No comments:

Grover Norquist and the demise of the GOP

The news that Grover Norquist's influence over the GOP is declining comes at a time when the future of the party is being questioned. An endless number of postmortem analysis of the failed election attempt by Mitt Romney have focused on everything from the way he combs his hair to his casually writing off 47% of the population. Not enough attention has been paid to the damage caused by the "no new taxes mantra" enforced by Grover Norquist. Almost everybody would like to pay lower taxes, and certainly not want to see them increase. However, rational people recognize the inherent unfairness of the current tax laws and that circumstances can arise that necessitate increasing taxes. Or can they? On Nov. 20, 2011, CBS aired an interview between Steve Croft and Grover Norquist. Below is an excerpt from that interview.


In the above interchange, Norquist's lust for power dribbles down his cheek like excess blood on a vampire's fang. If someone breaks their pledge to Norquist, the voters aren't going to give that person's opponent in the next primary as much money as they need to win. Norquist and his minions will. The flood of money from outside a state to make sure pledge breakers don't get elected usurps the right of local voters to choose the person they want to represent them. Ultimately, this isn't about taxes were pledge it, it's about one man's need for power
Posted by Neil Benson at 2:15 PM No comments:

John Koster, The Rape Thing' Does Not Excuse Abortions


John Koster, a Republican congressional candidate in Washington state, said Sunday that "the rape thing" is not a good enough reason for a woman to have an abortion."

Koster joins Richard Mourdock who said that pregnancy from rape is "something God intended," Rep. Todd Akin (R-Mo.) who said victims of "legitimate rape" almost never become pregnant, and Rep. Tom Smith (R-Pa.) who compared pregnancy as a result of rape to "having a baby out of wedlock." 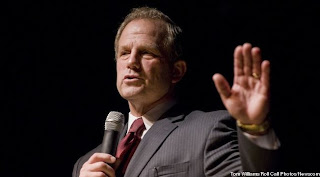 This isn't about right wing/tea party-GOP-Taliban/ candidates saying things that are stupid. It reveals a view of life that is beyond insensitivity. They are close to condemning women for getting raped, as if they were were responsible for their own tragedies.

The more they say, the worse it gets.
"Incest is so rare, I mean, it's so rare," he said. "But the rape thing-- you know, I know a woman who was raped and kept the child, gave it up for adoption, and she doesn't regret it."

He added, "On the rape thing, it's like, how does putting more violence onto a woman's body and taking the life of an innocent child that's a consequence of this crime -- how does that make it better? You know what I mean?"

Akins comments have cost him a Senate seat which was within his grasp until his utterances revealed a meanness devoid of sensitivity to women who have suffered a horrible tragedy.

There are undoubtedly more men who share the views of the four cited above. For them, it is fortunate that the election will be over and no one will be asking them questions that can destroy their careers by revealing who they really are.

Posted by Neil Benson at 7:43 PM No comments:

GOP Senate candidate Richard Mourdock said Monday he can't "unring the bell" on comments he made last week about rape, and he's joining a national Republican effort to shift discussion away from his remarks.

"You can't put the toothpaste back in the tube, you can't unring the bell," Mourdock said Monday. "I apologize that anyone might have been offended by it personally, and we've moved on and are talking about what people are talking about."

Mourdock also told reporters he was surprised by the reaction to his remarks after last week's Senate debate and didn't realize he had said anything controversial.

This is not just an instance of insensitivity about the subject of rape. Rather, it's the continued radioactive leakage of extremely conservative Republicans whose views on society in general, and women in particular, is appalling to the rest of society. The Tea Party has its own unique vision of the world. They can't why anyone would take issue with what they say, because they only speak the "truth."


"When I walked off the stage, I expected -- walking to my green room -- high-fives, because I had no idea that the statement that I made would possibly go a direction that it went," he said.
The direction that statement took last week knocked not only his campaign off track, but provided ammunition for national Democrats looking for women voters in key swing states. The Mourdock campaign has used the Democratic responses in fundraising appeals to supporters, while also arguing federal spending and the attack on the U.S. Embassy in Libya are more pertinent issues.
Top Republicans working the Sunday talk show circuit attempted to right the ship this weekend, answering questions about Mourdock's comments at times with statements about the attack. Wisconsin Sen. Ron Johnson, one of the tea party's biggest winners in 2010, told Fox News Sunday that abortion is not an issue voters are talking about.

Posted by Neil Benson at 7:16 PM No comments: 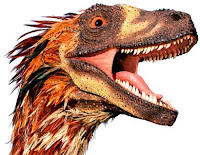 The traditional view of dinosaurs has been changing in recent years based on new evidence, which indicates that dinosaurs had feathers and links them ever more closely to birds.In an article in Slate on September 19, 2012, Brian Switek documents the changing picture of dinosaurs that is emerging as a result of new science. Evolutionists, welcome new evidence and data so they can have a more accurate understanding of what the dinosaurs were like and how they lived.

Biblical literalists, often called creationists, are upset by the changing picture of dinosaurs and have launched a campaign to "Take dinosaurs back."

"The dinosaurs of our childhood aren’t around anymore. The sluggish, swamp-bound pea-brains that haunted museum halls and trundled through picture books have been eviscerated by agile, hot-blooded, and, often, feathery dinosaurs that more accurately reflect what Tyrannosaurus rex and kin were actually like. What’s more, thanks to a heap of lovely fossils, we now know that even the most fearsome of the tyrant dinosaurs were closely related to the avian dinosaurs—the birds—that flit around our backyards today."

Ken Ham, president of Answers in Genesis—said, “Dinosaurs have been held hostage for decades” by his mortal enemy, the nefarious “secular humanists.”  Ham is upset that natural history museums,  which actually run research programs and contribute new facts and hypotheses to our understanding of prehistoric life, unlike the Creation Museum that uses the traditional evidence of dinosaurs as a static, dumb slow-moving creature.

The first dinosaurs evolved about 230 million years ago, and, with the exception of birds, perished about 6

The creationists argue that dinosaurs were created on Day 6 of creation week 6,000 years ago, with birds being brought into existence on Day 5. the idea that dinosaurs might have had feathers extend the birds, which further confuses "creationism science," one of the great oxymorons of our time. 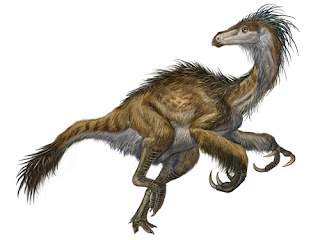 In Dark Journeys, short stories and dark poems describe perilous paths taken by mortals, vampires, and other creatures of the night. One story is about the surprise that awaits a mortal man when he has a picnic with the Queen of the forest. In A Problem with Werewolves a mortal male and his beautiful female vampire lover battle a pack of werewolves and a hideous demon. Dark poems tell of the painful and sometimes fatal relationships between mortals and vampires.If this sounds interesting, and I hope it does, please follow the link and buy the anthology for only $.99.
http://www.amazon.com/dp/B00AERRMIM

Posted by Neil Benson at 9:50 AM No comments:

This blog is about the absurdities in a world growing more absurd each day. Political, social, and economic issues will be discussed with an emphasis on humor, satire, and a touch of sarcasm. If the particular post makes no sense whatsoever, then it is satire or irony gone bad. No topic is taboo; no sacred cows are safe. I want to hear from the people who read my posts. SO PLEASE LEAVE COMMENTS. I look forward to hearing from you, especially visitors from foreign countries. 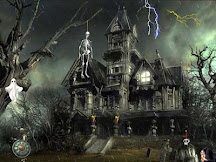 I pulled back from publishing blogs on this post because discussion on the key issues had become vitriolic and neither side was listening to the other. I tend to be liberal on most issues, but I tried to keep an open mind. Having an open mind no longer seems to be in vogue.


During the time I had been making posts to this blog, I moved from Myrtle Beach South Carolina, to Forsyth County Georgia. The birth of our granddaughter was a large incentive for moving here.